Francis Parkman (1823-1893) has been hailed as one of America's great nineteenth century historians, along with William Prescott, John Lothrop Motley, George Bancroft, and Henry Adams. He is a master of narrative history and is most known for his 'The Oregon Trail' and his seven volume work on the history of the French and English in North America. 'Montcalm and Wolfe', the seventh and last volume of the series, covers the conflict between England and France for supremacy in the New World from 1745 to 1884. The Seven Years War (the French and Indian War in the United States) is the denouement of this 200 year struggle with General Wolfe dying on the Plains of Abraham at the moment of victory. - Summary by Richard Carpenter The Wolfe–Montcalm Monument is in Governors' Garden beside the Château Frontenac, Quebec. The obelisk is the oldest monument in Quebec City and the second oldest war monument in Canada (1827) (the first being Nelson's Column, Montreal, 1809).[1][2] The mason who made the monument was John Phillips and the architect was Captain John Crawford Young of the 79th (Cameron) Highlanders.[3][4] The monument commemorates the gallantry of the two generals, James Wolfe and Louis-Joseph de Montcalm, who fought (and both died) in the Battle of the Plains of Abraham; it is one of very few monuments to the victor and the defeated in the same battle. The monument was unveiled in 1828 by Governor Dalhousie. The translation of the Latin on the monument, written by John Charlton Fisher reads 'Their courage gave them a common death, history a common fame, posterity a common memorial.'[5] 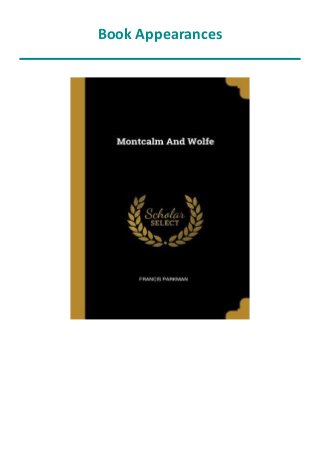